Ginkgo Organic Gardens now has a new Web site. The new site will soon have its own blog, along with a number of new features. We'll keep this blog around for history's sake; however, we will not be updating it regularly.
Posted by Alan at 8:58 PM

At 9 feet wide, 14.5 feet long, and 7 feet high, the Ginkgo Greenhouse (GG) should be large enough to house a variety of plants and equipment. Framed in aluminum and sporting polycarbonate panels and roof vents, GG will allow us to start plants like tomatoes and peppers on site. No longer will we need to rely on windowsills and other bits of sunny space borrowed during the late winter, or worry over transporting fragile flats of seedlings to the garden.

Construction of GG required almost the entire 2015 season. Work was done mostly on Saturdays after harvest and Sundays, but we worked on a few evenings, too. We started to prepare the site in May and finished (more or less; I suspect that there will always be things to tweak or repair) in early October.

Many people and organizations contributed to the financing and construction of the GG. If you volunteered during the 2015 growing season, I probably asked you to help me with some greenhouse-related task.

I'd like to name everyone who helped, but I'm certain to forget someone--after all, the project did require six months. I offer what I hope are pre-emptive apologies to anyone whose name I left out.

Thanks to the following:

1. The Culinary Trust--whose funds from its 2014 Richard Sax Food Action Grant made the greenhouse possible.
2. Dave Snyder--farmer, poet, networker, and Ginkgo emeritus--who wrote the original grant application.
3. Britt Willey, Joe Zarrow, and Ben Helphand of NeighborSpace, who contributed a testimonial for the grant application.
4. Lori Cannon of Vital Bridges, who contributed a testimonial for the application.
5. Tim Iteen, Treasurer for the Ginkgo Steering Committee, who managed the accounting for our purchases of the greenhouse, concrete, and gravel.
6. Eduardo Castillo of Palmer House Hilton, who built GG's foundation. This involved doing things like removing from post-holes enormous blocks of concrete left over from the building that originally occupied the garden site.
7. Eric Chapman and Bryan Helpert, who along with Ginkgo Steering Committee member Ivy Czekanski are the reason why the GG is upright at all, because they figured out how to connect the side panels to the back and front (something that eluded me completely).
8. Johanna Luks and Stephanie Salant, who contributed both individually and as volunteer coordinators for groups from Chicago Cares. Chicago Cares volunteers did things like help break down the old "dodecahedron" bed that was where GG is today and grade the site.
9. Volunteers from the Second City Dream Team, who helped prepare the GG site.
10. Jordan Grossman, who helped me to make sense of the more infuriating assembly diagrams in the multilingual instruction manual, which I am sure is responsible for bursts of umlaut-larded invective all over the Western gardening world.
11. Griffin Grossman, who helped connect the frame to the foundation, when he was not designing our ornamental beds.
12. John Cahill, who did everything from wrangling massive boxes of greenhouse components from the delivery truck to wielding a 50-lb breaker bar to bust up buried concrete blocks to fashioning replacement fittings for window panels from clothes hangers.
13. Karen Poulson, Evelyn Yang, and Dave Short of the Ginkgo Steering Committee, who in addition to helping with delivery and construction managed volunteers on Saturday workdays so that I could obsess over my green whale.


On May 30, Griffin and Stephanie helped the garden tremendously. Not only did they do the lion's share of harvesting, but they also delivered the harvest to the pantry in the family car. They then stayed to help arrange the produce in the pantry's baskets. The pantry volunteers have teased me in the past for a certain fussiness in my food styling, but I've never arranged kale leaves into a rosette as artfully as did Griffin.


Back at the garden, the ornamentals and flowers luxuriated in the unusually wet and cool weather.

Saturday, May 16th was that first day of the season when I really felt like we transitioned from starting the season to being in the season.  Of course the rhubarb and mint and oregano have been up for weeks, but they do that on their own.  On the sixteenth, we had harvestable heads of lettuce and radishes popping up out of the soil like the instant thermometer on a butterball (only the total opposite of an instant read thermometer on a butterball).  The lettuce and radish are from seeds sown by our volunteers.  Raise your hand if you planted Black Seeded Simpson lettuce! Oh, not you?  What about Red Sails? Surely, you are responsible for the Cherry Belle radishes?  Meanwhile, the Shirz and Penelope peas are making their way up trellises and our greens are looking great!

With regulars and volunteer groups from Second City and Northwestern University Gives Back, we got a tremendous amount of work done on this extended day.  We planted cucumbers. And sure, we planted your regular old slice it in a salad cause you need something crunchy cucumber (yawn), but we also planted Lemon cukes, which look like yellow tennis balls, and Armenian cucumbers (hubba hubba).  We also planted beans (Royal Burgundy and Milk & Cider), watermelon, Patty Pan squash, and a succession of lettuce.

And that's just the stuff you can eat!  Don't get me started on the geraniums and Inky Fingers coleus.

The season is under way.  Unless we really screw something up, we will bring a harvest to Vital Bridges every week starting this upcoming Saturday and continuing into the late fall. 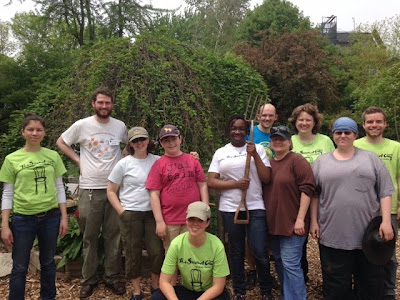 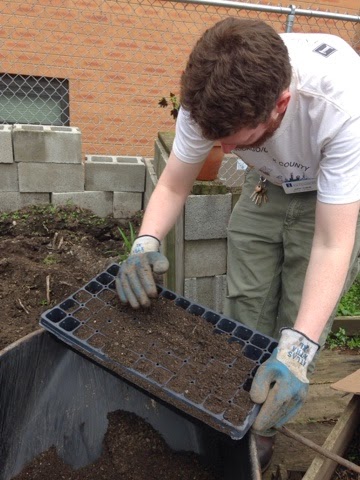 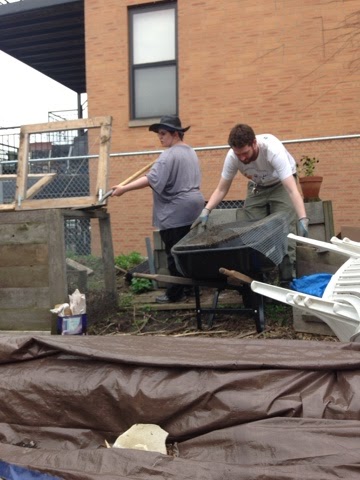 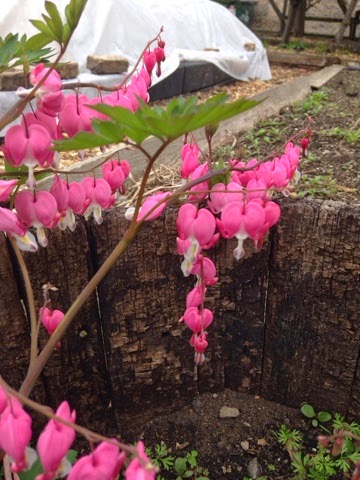 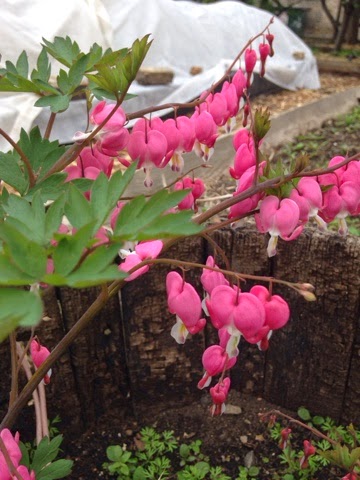 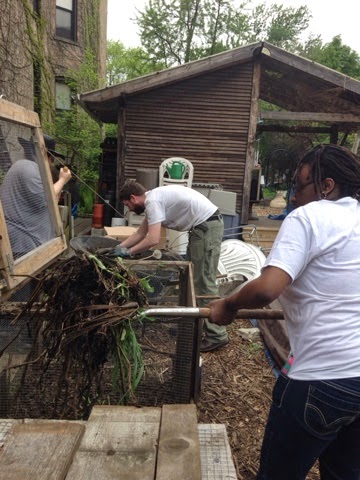 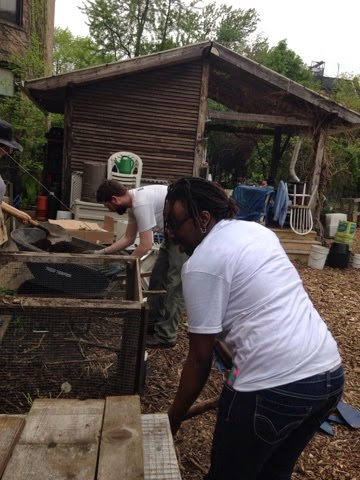 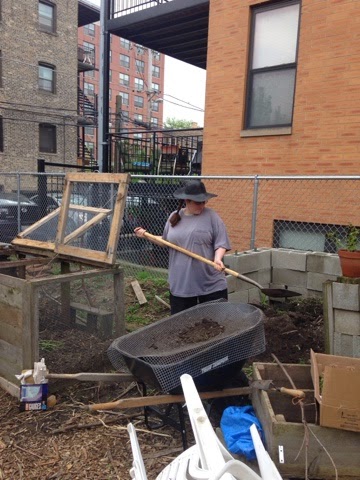 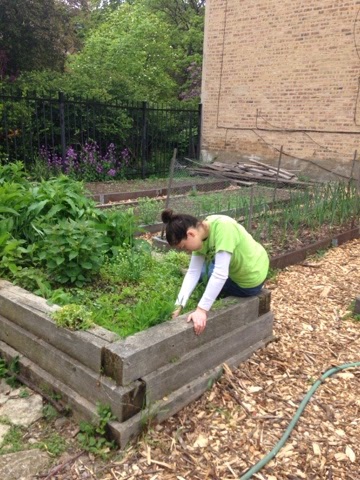 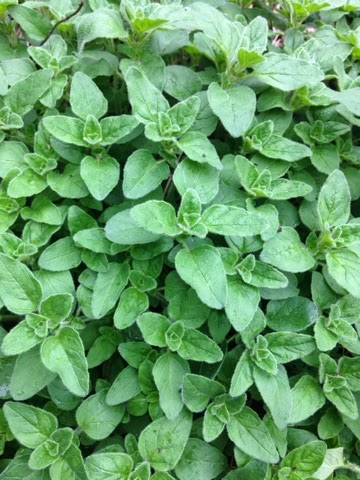 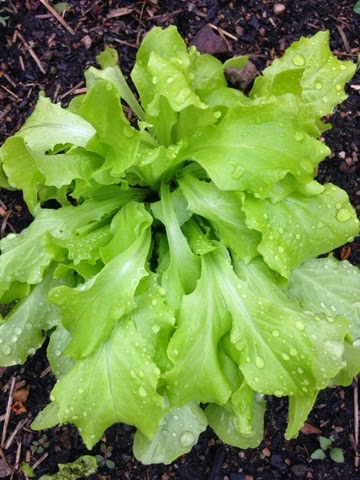 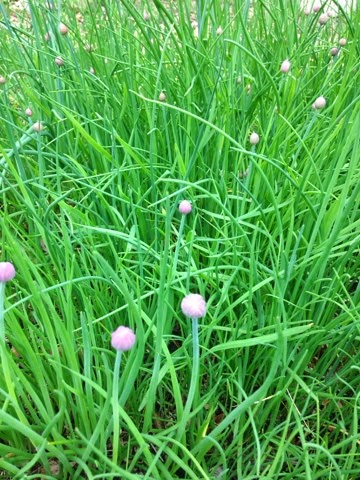 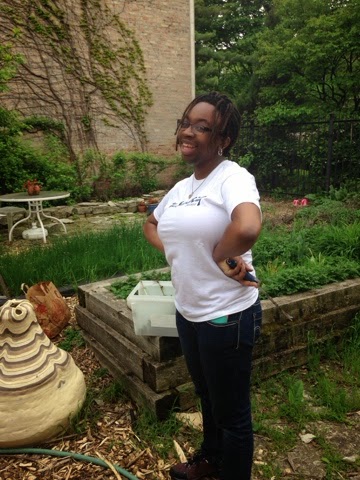 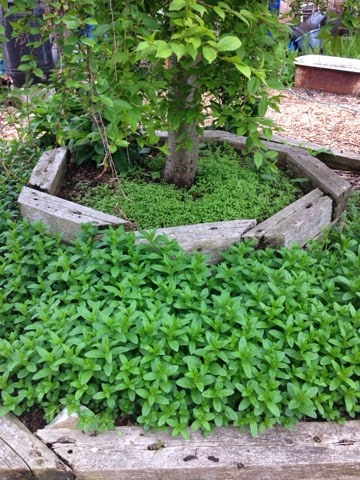 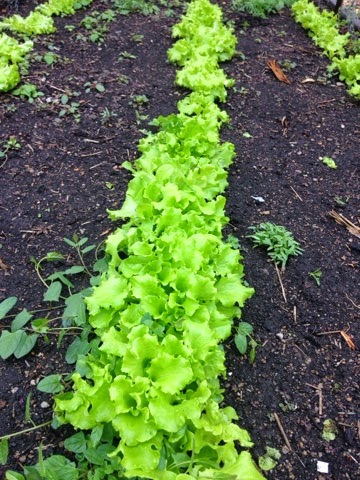 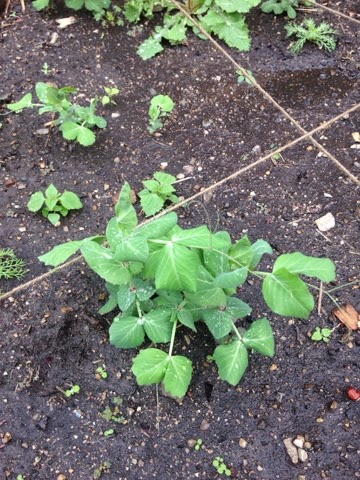 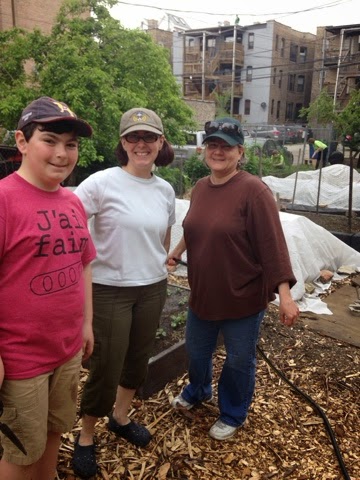 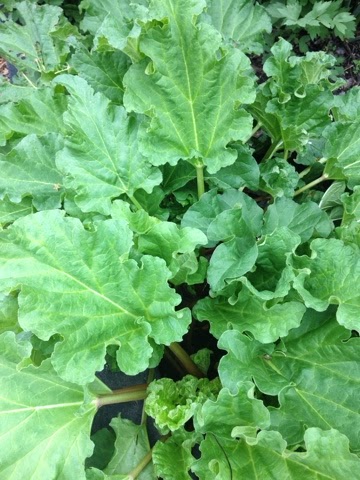 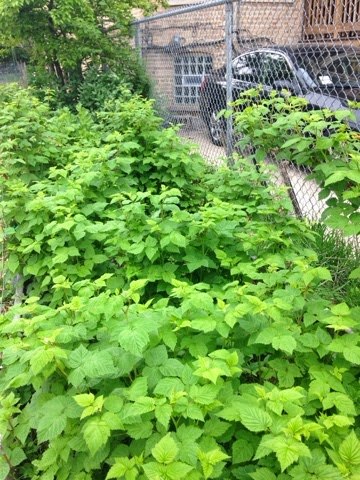 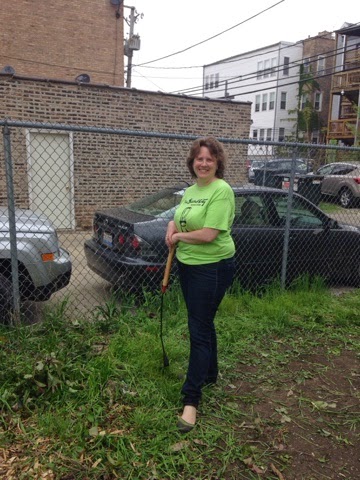 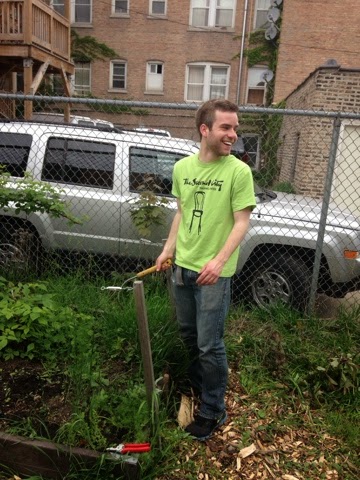 9 May 2015 was chilly and overcast. We were fortunate that the rain stopped before we opened the garden to welcome the group of hardy volunteers who had arrived to help, including a group from Chicago Cares.

There are varieties of loveliness in the garden that occur throughout the year. It is sometimes easy to miss the shortlived beauty that appears just after a spring rainstorm, especially when it is cold and damp. Blooms and seedlings glowed in the cloud-obscured morning sunlight as raindrops dry on petals and leaves. The front garden was carpeted with petals that had fallen from flowering trees overhead. 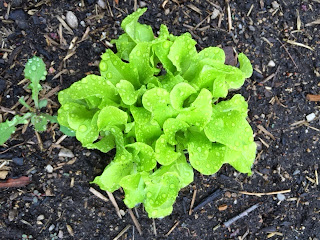 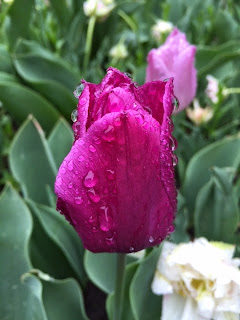 Our group had work to do that day that wasn't particularly lovely: we needed to rodent-proof the beds that house the fruit trees in the back of the garden near the alley. While some of us installed hardware cloth around the tree trunks (to keep critters from digging into the beds), others sifted compost. After covering the hardware cloth with compost, we sowed seeds for alyssium between the trees. 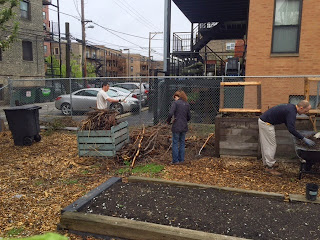 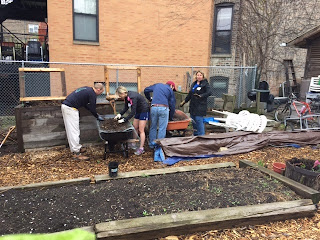 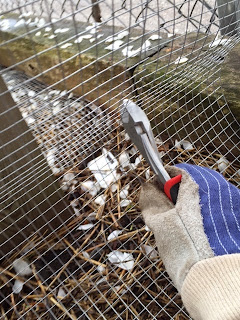 We finished the day by planting a bed of carrots. In previous years, we fussed over our carrots, preparing a special bed for them by incorporating sand in the hopes that the looser soil would ease root growth. We've never really had much success in this coddling of our carrots; this year, we're letting them fend for themselves in a regular bed. 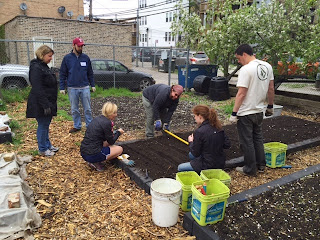 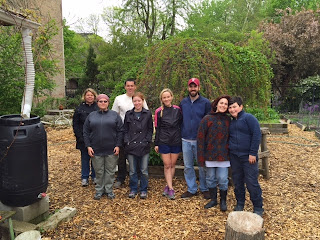 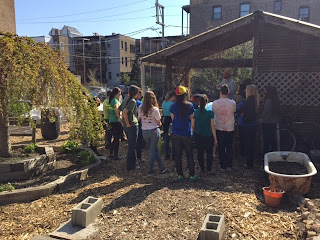 On May 2 2015, two groups of volunteers worked together to complete a huge amount of work at the garden. May 2 was DePaul University's 17th Vincentian Service Day, and at least the third time that a large group of students has arrived at the garden ready to help us finish preparing it for the season. The DePaul students, many in blue, were joined by a green-clad group of volunteers from The Second City's Volunteer Team.

After John introduced everyone to the garden and described the tasks that we had planned for the day, he unveiled two pies that he had made using rhubarb from the garden. These pies approached the limits of rhubarb density possible in baked goods.

The volunteers set to work. Two teams unearthed the fig trees that we buried last year so that they would survive the winter. The trees looked gray and a little groggy, but they both had already started putting forth leaves.


Another team distributed the remainder of the mound of wood chips about the garden, while a smaller group nearby repaired our decrepit back gate.


After finishing the heavy work, we moved on to planting. Before the start of the work day, we had received a number of flats of kale and cabbage seedlings from Dave, who had started the seedlings using greenhouse space graciously donated by the Center for Green Technology. The kale seeds themselves were made possible by yet another gracious donation from Jill, the mother of our regular volunteer and Chicago Cares coordinator Johanna.

We transplanted the kale seedlings from the flats to our raised beds. After transplanting, we covered our beds with hoop houses: a number of kale pests (including flea beetles) had reached the point in their season when they lay eggs, and we wanted to try to prevent infestation.

We finished up by watering all of the beds and setting up pea trellises.

Thanks to the efforts of our volunteers, the garden was well prepared for the 2015 growing season.

This was the blog for Ginkgo Organic Gardens from 2009 to 2016. For the latest information, please go to Ginkgo's current site.